Hope everyone is safe and staying sheltered.  DH and I have been working from home over a week.  For me, it has been very relaxing.  Actually been able to have a somewhat normal life with scheduled meals. 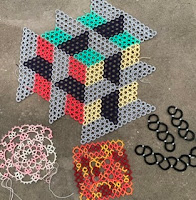 On a brighter note, Tat-a-Renda is sponsoring a tat-along through her Facebook page.  The pink/white doily is this WIP.

The big cube is another WIP.  It is from Karen Bovard Illusions of 3-D Split Ring Tatting.  Almost complete.  Six more pieces.  This has certainly tested my ability to keep tension consistent.  Will probably make another in the future.

Earrings and necklace is from Marilee Rockley’s Tatting with Beads Jewelry.  This has become an easy go to pattern if I need a quick gift.

The last is a few rows of a mat from Tatting a 4-Square Ring by Mary Maynard.  I like it so well that I decided to stop and make another using a variegated blue thread.

Lastly,  Karen Solomon is also hosting a Tat-along.  You may find it here:  gracefulartsfiberstudio.blogspot.com.

Happy New Years to everyone.  Hope your year is healthy, full of joy/happiness and whatever crafts you are involved in. 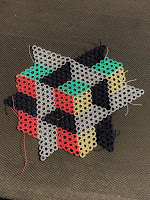 Been working on redoing the 3D cube from Karen Brovard's book Illusions of 3-D in Split Ring Tatting.  It is looking better.  Still a challenge for me (tension) but I have figured out a way to make sure it is the rings are close in size to one another.  Love the 3D effect.  Not to wild about the colors.  Will do another but with shades of blue for the cube.

The earrings are a pattern by Nina Libin called Earrings for Snow Princess.  They were a gift for my daughter made with peridot beads (her birthstone).  Swirl join makes the little stary in the middle.

One goal I have set  for myself is to blog an entry a month.  I have been very laxed.  Another goal is to stay organized.  So far both have been accomplished.  I am in the middle of organizing my tatting area.  Hopefully, will have that done tomorrow.  Need to start getting things ready for this year's Tat Days and finish WIP's.  If I can stay organized and focused, I should complete both of these.
Posted by Phyllis at 5:38 PM 4 comments: 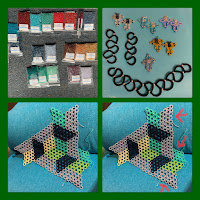 I needed some beads (specifically delica) for some earrings I wanted to make for a possible craft exhibit.  I had ordered from Fusion Beads before and checked their webside again.  Lo and behold, they had a clearance section.  So, I proceeded to select a bunch of colors for several projects.  Shipping was quick.  The Angel earrings were made with some of the beads.  Love this pattern.  It can be found on the 2019 Palmetto Tat Days CD.  Taught by Bonnie Swank.

The black item is a necklace and earrings for a present.  Needs to be finished with findings.  Pattern from Marlie Rockley's book Tatting with Beads Jewelry.  It is a nice, quick pattern.

The bottom two photos are from Karen Brovard's book Illusions of 3-D in Split Ring Tatting.  It is a challenging pattern.  Thought I was doing ok but I really need to work on tension as illustrated by the arrows.  The green block with the middle arrow was the last section.  It is definately tight.  Soooooo, I decided to restart.  I have made a single ring to use as a marker to compare against rings as they are made.  Seems to be working much better.  Will post a pic with my next post.

It is on hold right now as I am working on presents (althought I sneak a few rings now and then).

Also, Lisa from Tatting Corner has put out a request.  The Lacey Ladies of Arizona is hosting the 2020 IOLI Convention in late July 2020.  They need 300+ bookmarks - all types welcome.  Bookmarks are to be 4 - 6 inches long.  She would like to make this a service project and flood the Lacey Ladies with bookmarks.  For more info/address to send bookmarks to, search Tatting Corner on Facebook or send her a message.
Posted by Phyllis at 7:14 PM 2 comments: 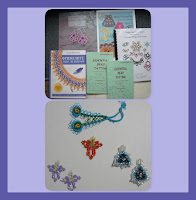 Here are my new additions to my library that I picked up.  Need to finish a few projects before I will allow myself to start working some of these items.

I was able to finish some projects this year at Tat Days.  The peacock is pearl tatting (class by Martha Ess), beaded lavender angel earrings and tri-color maltese earrings (pattern by Bonnie Swank and Nina Libin, class by Bonnie).  After my granddaughter saw the angel earrings, my granddaughter wanted one.  She picked out the orange beads and viola, an orange angel was created.

Georgia was under the weather the whole weekend (we missed you).  Tamie did a wonderful job at filling in for her at the auction.  Laughs around as well as a couple fierce bidding wars.

Shuttle decorating was a hit.  It was nice to see so many having fun, talking and putting their own touches on their shuttles to make them one of a kind.  The only draw back - the smell of the nail top coat used to seal the shuttles.  Fans helped but if ever a next time, sealing needs to be done on their own or outside.  Thanks Tonya for helping.

The week after Tat Days, DH and I went to St. Lucia (anniversary).  Of course, I brought my tatting along (Marie Smith's angel pattern and Reit's owl pattern, thread for both).  Weather was hot but it was nice to get away and relax.  One of the flight attendants on the way down saw me and asked if that was tatting.  I said yes and we talked for a few minutes.  Once at St. Lucia, I tatted by the pool when relaxing.  Several staff stopped by asking how things were going but occasionally one would stop and we would talk about tatting.  They had never seen tatting before.  By then I had several complete angels/owls.  I started giving them away to those that seem impressed.  It was joyous to see how happy they were to receive one.

The amazing thing was on the flight home.  The same flight attendant was on our return flight!  She stopped and asked if I remembered her.  Of course I did, and I had a finished angel to give to her as well.

Continuing on working to finish WIP's.  It is amazing how fast projects get away when you want to tat them all!
Posted by Phyllis at 3:26 PM 3 comments: 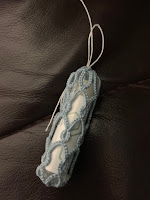 Home again, home again, lickity split.  Took most of the day to get unpacked, reorganized and finished a couple of projects.

First, another nice Tat Days has come and gone.  Early mornings and late nights.  I miss those who were not able to attend, stay or feeling under the weather.

Some first timers that I met were:  Jenni Clark from Australia, Sue Fuller from the Tuesday Online Tat Design class, and Melanie Cervi who is in charge of the Monday online homework page.  I know I have missed others either not met or unrecognized.  Note:  it was nice to meet you also.  It was also nice to catch up with others I had met before (the regulars and those who are able to come when they can).

The upper left picture is a chapstick holder.  It is a pattern from Heather Johnston that I modified a bit with permission.  I made these for the teacher bags this year.  I used every color of size 10 thread I had so everyone received a different color holder.

The past few years I have volunteered to test tat.  The picture on the right are two of the patterns.  The earrings are called Dancing  Peacock Earrings.  It is based on a pattern by Muskaan (see her blogpost from January 23, 2018) modified by Anita Berry with permission.  Actually, ended up being an assistant at this class.  The oval doily is called Sonata by Melanie Cervi.  Nice relaxing pattern.